Early Tuesday morning, a whistleblower who allegedly works in the federal circuit revealed a Supreme Court justice was seen in various “Epstein tapes” that were recently recovered by investigators:

“One of the SCOTUS [justices] is in the Epstein tapes that were recovered yesterday. I’m sure you can guess which one.

“The shocking part is the canary is telling the feds a certain nation state has been blackmailing this gentleman since prior to his nomination to SCOTUS.

“What does this mean? This justice was hand picked at the highest levels specifically because he was being controlled via blackmail. A sheep in wolf’s clothing appearing to be which he is not...

... After being prodded by readers to disclose the exact country, the whistleblower stated the following:

“I don’t know which country, but UK was in bed with our deep state intelligence agencies trying to dig up dirt on Trump. I don’t think that is even questioned anymore. Outside of my area of specific knowledge though.”

Also, since it was mentioned that the justice is a male (e.g. “gentleman”), some have speculated how it might be the Chief Justice. 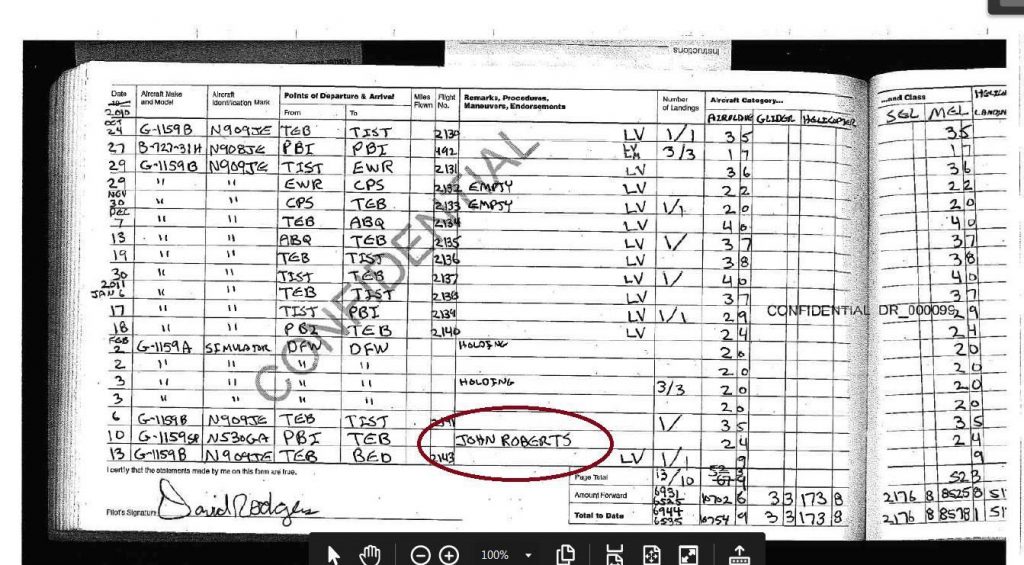 In 2019, the Daily Mail published an article that included information about a passenger identified as “John Roberts” flying with Epstein on at least two occasions. (Source / Archive link)

“Here is the best part. The SCOTUS justice on the tapes – it is being rumored in the federal court community – has sat down with the FBI to roll on a previous president AND wife in an effort to keep his position, or more likely, be allowed to gracefully retire before the next SCOTUS term.

“If I were going to predict the future we are going to see a resignation in about 2-3 weeks as the last of the SCOTUS cases for this term are just about done.” [https://www.pennswordtwo.com/article/did-supreme-court-justice-john-roberts-just-get-fileted-by-the-epstein-tapes.html]

Note: With the upcoming "Kraken"case in "the docket of the Supreme Court," please put Justice Brett Kavanaugh, Justice Amy Coney Barrett and Justice Neil Gorsuch in the following Prayer of Command against "satanic forces":

In His Name and by the power of His Cross and Blood, I ask Jesus to bind any evil spirits, forces and powers of the earth, air, fire, or water, of the netherworld and the satanic forces of nature.  By the power of the Holy Spirit and by His authority, I ask Jesus Christ to break any curses, hexes, or spells and send them back to where they came from, if it be His Holy Will.  I beseech Thee Lord Jesus to protect us by pouring Thy Precious Blood on us (my family, etc.), which Thou hast shed for us and I ask Thee to command that any departing spirits leave quietly, without disturbance, and go straight to Thy Cross to dispose of as Thou sees fit.  I ask Thee to bind any demonic interaction, interplay, or communications.  I place N. (Person, place or thing) under the protection of the Blood of Jesus Christ which He shed for us. Amen
Voter fraud attorney Sidney Powell's renowned statistician, Dr. William Briggs stated that the "conservative" SCOTUS Justices did a Pontius Pilate by "cuck[ing]. There is no other word for it. Their entire argument for rejecting the suit brought Texas and joined by almost half the States was Nyah nyah nyah!" [https://wmbriggs.com/post/33854/]
Will Kavanaugh, Barrett and Gorsuch in the upcoming "Kraken"case cowardly run away from it as they did with the Texas case and be accomplices in the United States becoming the next totalitarian impoverished Chinese Communist satellite like Venezuela by not joining the fight for truth and justice against the massive voter fraud that is attempting to destroy America?
(Will US be Venezuela?: Ex-CIA Official told Epoch Times "Chávez started to Focus on [Smartmatic] Voting Machines to Ensure Victory as early as 2003": http://catholicmonitor.blogspot.com/2020/12/will-us-be-venezuela-ex-cia-official.html)
The famed Bishop Rene Gracida answered the above question, which Kavanaugh, Barrett and Gorsuch must answer to God now and at the the hour of their death, saying America is in a battle for its very survival as a, free and independent, God fearing nation:

"This month’s battle for the republic is tremendous and earth-shaking. The only comparable moments in our history are those moments before the American Civil War and those days leading up to George Washington’s battles against the British." [https://abyssum.org/2020/12/03/this-months-battle-for-the-republic-is-tremendous-and-earth-shaking-the-only-comparable-moments-in-our-history-are-those-moments-before-the-american-civil-war-and-those-days-leading-up-to-ge/]

Bishop Gracida was a courageous WWII airman, monk, friend of Pope John Paul II and the “Savior of EWTN” as Raymond Arroyo called him in his book who at 96 looks like his is in his 70’s, is mentally sharper than most men 40 years younger than him and looks by a large margin younger than Pope Benedict XVI or Francis.

Gracida is declaring that America is in a battle between good and evil.

Important Note: The publisher of the Catholic Monitor has made a pledge to say the Sorrowful Mysteries of the Rosary everyday for a Rosary Lepanto-like victory for President Trump. He asks all CM readers to make this pledge.