Marshall Shepherd
Senior Contributor
New! Follow this author to improve your content experience.
Jun 15, 2019,09:24am EDT
This article is more than 3 years old.

According to CNN meteorologist Brandon Miller, "Over 40% of Greenland experienced melting yesterday, with total ice loss estimated to be more than 2 gigatons (a gigaton is equal to 1 billion tons)." University of Georgia climatologist Thomas Mote, an award-winning scientist who studies Greenland using satellite observations, told Miller that melting is comparable to historic melting in 2012 and a bad sign for further melting this season. In an otherwise intelligent conversation on social media about this, a "zombie theory" (a claim long refuted but lives on) was injected about natural climate change, Vikings, and anthropogenic climate change being an "overrated theory." After I gave my eyes a chance to finish rolling, I thought to myself, "Oh boy, here we go." Someone that doesn't understand that climatologists know that climate changes naturally and about the Little Ice Age. Yet, none of that disputes the fact that carbon dioxide values are increasing significantly and that the naturally-varying climate system is responding to the new stimulus (you know, the way naturally growing-grass responds to fertilizer on the lawn). I don't want to waste time swatting away a swarm of "zombie theory" flies. I need to deal with the use of "theory" when people try to refute climate change. 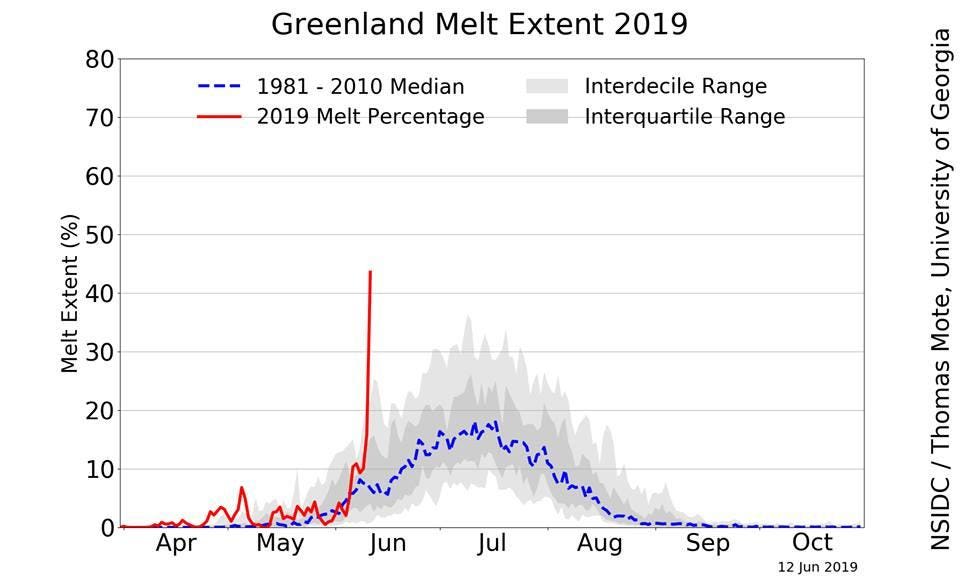 In defining the word "theory," Merriam-Webster.com specifically identifies the challenges associated with the word:

there are two senses of theory which are sometimes troublesome. These are the senses which are defined as “a plausible or scientifically acceptable general principle or body of principles offered to explain phenomena” and “an unproven assumption; conjecture.” The second of these is occasionally misapplied in cases where the former is meant, as when a particular scientific theory is derided as "just a theory," implying that it is no more than speculation or conjecture. One may certainly disagree with scientists regarding their theories, but it is an inaccurate interpretation of language to regard their use of the word as implying a tentative hypothesis; the scientific use of theory is quite different than the speculative use of the word.

Jaime Tanner, a professor of biology at Marlobro College, told Livescience.com that "Most people use the word 'theory' to mean an idea or hunch that someone has, but in science the word 'theory' refers to the way that we interpret facts." For example, atmospheric physics theory that goes back to the late 1800's and early 1900s established that small amounts contributions of carbon dioxide can warm the atmosphere. By the way, an oft-cited zombie theory is that there is too little carbon dioxide in the atmosphere to matter. I usually respond by noting that it doesn't take very much venom from a black mamba to kill either.

Over the years, I have noticed that the small but very vocal "climate dismissive" sector (see below) of the Yale Program on Climate Communication group's "Six Americas" study tends to fall into this trap by framing human contributions to changing climate as uncertain, unproven, or a hoax.

The 6 Americas study on how people perceive climate change.

I also notice that some people tend to confuse or conflate "hypothesis" and "theory." A hypothesis is an idea that is offered or assumed with the intent of being tested. A theory is intended to explain processes already supported or substantiated by data and experimentation. An article at Livescience.com explains the process by which a hypothesis becomes a theory:

Every scientific theory starts as a hypothesis. A scientific hypothesis is a suggested solution for an unexplained occurrence that doesn't fit into a currently accepted scientific theory....If enough evidence accumulates to support a hypothesis, it moves to the next step — known as a theory — in the scientific method and becomes accepted as a valid explanation of a phenomenon.

As a scientist, I often see people weighted down in confirmation biases or ideological tribalism misinterpret "theory" or strategically employ it to advance their position.

How is a "law" different than a "theory" then? There is often confusion over the relative "pecking order" of scientific law and scientific theory. David Pfeiffer offers a simple but effective explanation in his essay:

I conclude with a nod to a paper published in the journal Science in 1988. It was entitled, "The greenhouse theory of climate change: a test by an inadvertent global experiment." If you read the paper, it outlines outcomes that are expected to happen as greenhouse gases increase within the atmosphere (by the way, they are happening). The author, Dr. V. Ramanathan, wrote in the abstract, "Hence, the greenhouse theory of climate change has reached the crucial stage of verification."

As I close, something funny popped into my mind. A combination of process including atmospheric variability and climate warming likely explain changes happening in Greenland right now. Ironically, none of my colleagues discussing this recent event explicitly mentioned climate warming. It was only lobbed into the discussion by someone with a contrarian viewpoint. Go figure.